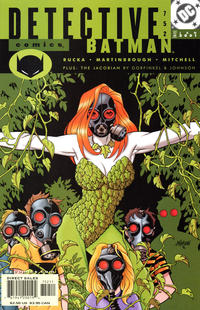 Originally an anthology comic, in the manner of the times, Detective Comics #1 (March 1937) featured stories in the "hard-boiled detective" genre, with such stars as Ching Lung (a Fu Manchu-style "Yellow Peril" villain); Slam Bradley (created by Jerry Siegel and Joe Shuster before their character Superman saw print a year later); and Speed Saunders, among others. Its first editor, Vin Sullivan, also drew the debut issue's cover. The Crimson Avenger debuted in issue #20 (October 1938).

Detective Comics #27 (March 1939 with a printed date of May 1939) featured the first appearance of Batman, who would eventually become the star of the title; the cover logo is often written as "Detective Comics featuring Batman". Batman's origin is first revealed in a two-page story in issue #33 (Nov. 1939). Batman became the main cover feature of the title beginning with issue #35 (Jan. 1940). Issue #38 (April 1940) introduced Batman's sidekick Robin, billed as "The Sensational Character Find of 1940" on the cover and the first of several characters that would make up the "Batman Family". Robin's appearance and the subsequent increase in sales of the book soon led to the trend of superheroes and young sidekicks that characterize the era that fans and historians call the Golden Age of Comic Books. Several of Batman's best known villains debuted in the pages of Detective Comics during this era, including the Penguin in issue #58, Two-Face in issue #66, and the Riddler in issue #140.

Over the decades it was published the title was usually monthly. Page counts dropped over the years, as did the number of features. Batman remained the headliner of the title from his introduction, and was at times the sole feature. The title has periodically featured a back-up strip, and for two periods in the 1970s it was a larger anthology title again (though during the first all of the features other than Batman were reprints).

The title ended when DC relaunched all their titles as part of their "New 52" event, though the rebooted series eventually resumed the numbering of the original.