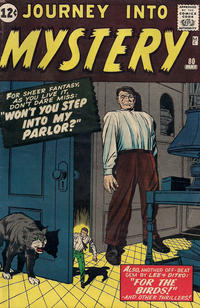 Accompanied from 1965 by Journey into Mystery Annual (Marvel, 1966 series).

This series was launched as one of five science-fiction/horror anthologies launched in a six-month period (cover dates January 1952–June 1952), increasing Marvel's science-fiction line from seven to twelve books. Journey into Mystery was cancelled at the collapse of Marvel's distributor and the subsequent restructuring known as the "Atlas Implosion", but was relaunched a year later along with the new series Tales of Suspense (Marvel, 1959 series), Tales to Astonish (Marvel, 1959 series) and Strange Worlds (Marvel, 1958 series) to expand and revamp Marvel's science-fiction line following Jack Kirby's return to the company. It included the Thor lead feature from issue #83 (August 1962). Exclusively contained Thor and Asgard stories from issue #105 (June 1964). This series introduced Thor, the Warriors Three and many other Asgardian characters.

Scripts were generally not credited before the superhero days. However, it is known that Stan Lee (sometimes assisted by Larry Lieber, or Lieber on his own) wrote the overwhelming majority of these stories from 1959 to 1963. Where there is no positive confirmation, credits may be listed as "Stan Lee ?; Larry Lieber ?", or either person individually, or simply "?", according to the indexer's best information.
Editing
View Change History
Series at my.comics.org