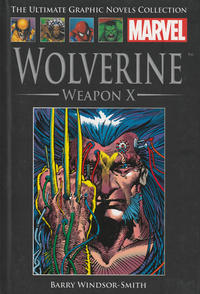 Series Details:
Publisher's Brands:
Indicia Publishers:
Notes
Part works series of graphic novels featuring Marvel characters published by Hachette Partworks Limited in the U.K Intended to be 120 parts (including the 'classic' issues) ending mid 2016. This has been extended a number of times since, with the collection currently set to run to 250 parts.

Each issue has two numbers; an issue number as a sticker on the cover, and a number on the spine giving the order they should be shelved in order to show a panoramic picture across the spines. The classic series sits to the left of this series.

Although it is easy to confuse books between the two series, the easiest way to distinguish between them is by the four characters at the top of each front cover. From left to right this series has Wolverine, Storm, Spider-Man and Hulk.
Editing
View Change History
Series at my.comics.org