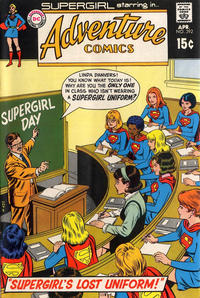 Series Details:
Publisher's Brands:
Indicia Publishers:
Tracking:
Notes
Adventure Comics began its nearly 50-year run in December 1935 under the title New Comics, which was only the second comic book series published by National Allied Publications, now DC. The series was retitled New Adventure Comics with its 12th issue in January 1937. Issue #32 (November 1938) saw the title changed again to Adventure Comics, which would remain the book's name for the duration of its existence.

Originally a humor anthology, it evolved into a serious adventure anthology. The series' focus gradually shifted to superhero stories starting with the debut of the Sandman in issue #40. Other superheroes who appeared in the early days of Adventure included Hourman (from #48 to #83); Starman (#61–102); and Simon and Kirby's Manhunter (#73-#92).

With #103, Superboy, Green Arrow, Johnny Quick, and Aquaman moved to the series from More Fun Comics, which was itself converted to a humor format. Starman's and Sandman's series were canceled to make room for the new features, while Genius Jones moved to More Fun. Superboy became the star of the book, and would appear on each cover into 1969. Superboy's popularity in Adventure resulted in the character receiving his own title in 1949, when superhero titles in general were losing popularity. Krypto the Superdog debuted in issue #210.

In issue #247 (April 1958), Otto Binder and Al Plastino introduced the Legion of Super-Heroes in a Superboy story. The group became popular, and would replace "Tales of the Bizarro World" as the Adventure backup feature with #300, and soon be promoted to its lead. Issue #260 saw the first Silver Age appearance of Aquaman. In Adventure Comics #346, Jim Shooter, 14 years old at the time, wrote his first Legion story. The Legion feature lasted until issue #380. With the next issue, Supergirl migrated from the backup slot in Action Comics to the starring feature in Adventure and ran until issue #424.

As of #425, the book's theme changed from superhero adventure to fantasy/supernatural adventure. Soon, editor Joe Orlando was trying out horror-tinged costumed heroes such as the Black Orchid, and then the Spectre. Before long, conventional superheroes returned to the book, beginning with a three-issue run of Aquaman (issues #435–437) and then a newly drawn 1940s Seven Soldiers of Victory script (issues #438–443). Aquaman was promoted to lead (issues #441–452), and backing him up were three-part story arcs featuring the Creeper (#445–447), the Martian Manhunter (#449–451), bracketed by issue-length Aquaman leads. He was awarded his own title and Superboy (#453–458) took over Adventure with Aqualad (#453–455) and Eclipso (#457–458) backups. Following this was a run as a Dollar Comic format giant-sized book (issues #459–466), including such features as the resolution of Return of the New Gods (cancelled in July–August 1978), "Deadman", and the "Justice Society of America".

The standard format returned (issues #467–478), split between a new Starman and Plastic Man. With an increase in the story-and-art page count, the last four issues also included one more run of Aquaman. All three were dropped simultaneously to make way for a new version of an old feature, "Dial H for Hero" (issues #479–490). Issue #490 (February 1982) saw the comic's cancellation.

In September 1982 it was revived as a digest-sized comic. This format lasted from issues #491–503, with most stories during this period being reprints (featuring the Legion of Super-Heroes, from the beginning and in chronological order, and others), and with new stories featuring the Marvel Family and the Challengers of the Unknown including a new five-issue retelling of their origin. The long-running title was discontinued with the September 1983 issue.